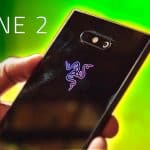 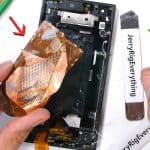 The Razer Phone 2 is one of the coolest phones
I've taken apart in a very long time. Wait till you see this vapor chamber – it's
incredibly impressive. The clear version I made was cosmetically
disappointing, but the guts of this phone more than make up for it. It's time to review the Razer Phone 2 from
the inside. Let's get started. [Intro] One good thing about having the clear version,
is now you can actually watch how deep my knife penetrates every time I remove back
glass covers from phones. All I ever use is the tip. Any deeper, and fragile stuff might get damaged…like
the battery or the power ribbons. The Razer Phone 2 has 10 screws holding the
top plastic plate over the motherboard. The screws are different, so I'm keeping them
organized as I set them off to the side. Then the plastic lifts up just enough for
me to unsnap the back LED panel Lego-style ribbon connector. And the whole thing can be removed from the
phone. The RGB pad is pretty interesting, especially
since it only illuminates specifically around the snake logo when the phone is turned on.

Apple really dropped the ball by not making
their Apple logo glow on the back of the iPhones. I'll pull off the metal bracket over the battery
and charging port plugs and set that off to the side. And then I'll unclip the battery. The bottom half of the phone has another 10
screws, once again, all different sizes. And then amazingly, the whole battery and
wireless charging combo very easily unfolds out of the phone, exposing part of the massive
copper vapor chamber.

And Marquez will be happy to see a larger
and stronger vibrator this year. It's not taptic, but should still get the
job done. The battery is a 4000 milliamp hour monster,
and very much appreciated that it's not strapped in next to the fragile electronics with a
ridiculous amount of adhesive. Now let's finish unburying the ginormous copper
vapor chamber. There are 2 screws holding on the motherboard. I'll unsnap the charging port ribbon with
my plastic pry tool, along with the side button ribbon, like a little Lego. Then I'll unplug the 3 little wire cables
along the right side – there are a lot of those this year. The SIM and expandable memory card tray are
next. I'll pop that out of the phone and get the
little wire cable on the left side unplugged, as well as the front facing camera. Then the motherboard can lift up and out of
the phone body. Still attached is the screen ribbon cable
plugged into the underside of the motherboard. It's got it's own little silver bracket holding
the ribbon in place. I'll set that off to the side. The gob of thermal paste you see is right
over top of the processor on this phone.

The processor is the part that generates the
most heat. The paste helps transfer that heat to the
top left corner of the copper vapor chamber. The rear cameras are also plugged into the
motherboard. We have our normal 12 megapixel lens with
optical image stabilization. And an additional camera with 2x optical zoom
– the perfect combo. I'll let other reviewers handle the comparisons
and see whether the pictures are good or not.

But hardware wise, this is the ideal setup. The front facing camera has quite a lot of
adhesive holding it in place. It's an 8 megapixel little guy. And now for the top stereo speaker. The Razer Phone is known for it's iconically
large speaker grilles, but interestingly enough, the speakers inside aren't that much larger
than normal. Size-wise the speakers are a bit bigger than
the Pixel 3, but not by much. It does have it's own waterproof mesh over
top with a rubber ring to help keep a tight seal against the phone body. But the interesting thing is the tail end
of the speaker. When you mount a large speaker, like a subwoofer,
it's usually placed inside of a box so the speaker has room to move. A lot of cellphones have speakers in such
a tight box that there's no room for movement so they sound terrible. That's not the case with the Razer Phone. The Razer Phone's earpiece has it's own box
with a large air chamber off to the side that allows for speaker movement. It's pretty cool.

I'll just put this back where it came from. The two little square watertight microphone
mesh slots have green rubber on them. It probably wasn't intentional but it still
looks cool. The vapor chamber is still covered up by some
ribbons from down here on the charging port. There are 2 screws holding the board in place. And then an additional 2 screws on the USB-C
port portion. Then the whole thing pulls up and out of the
phone. It's got a little black rubber ring around
the lip of the port, which is good for water resistance, as well as minimizing stress on
the port itself when it gets plugged in.

The bottom speaker, still smaller than you
might think when compared to the outer grille size, also has it's own air compartment right
next to the speaker. And it has it's own water resistant mesh over
top. And finally we're here: the vaper chamber. Basically the whole area inside of the phone. This copper heat sink is pretty awesome. Having a copper plate this large inside of
a phone is already a huge boost to thermal performance over aluminum or steel. But, as I was removing the plate, you can
tell how thick it is.

Basically as the processor heats up the top
left corner of the vapor chamber, the vapor inside also heats up and carries the heat
away to the far side of chamber, where it cools down into liquid and then flows back
to repeat the process. It's kind of like a heat pipe on steroids. Basically a whole radiator for your phone. Pretty fascinating. And you know me, we aren't going to let this
pass by without exploring the inside.

Peeling back the copper, we actually see physical
liquid, not just gas. Little droplets covering the inside of the
copper envelope. I mean, copper along would probably have been
sufficient. But copper combined with liquid and channels
for airflow is seriously some next level stuff. It's like a waterbed inside of your cellphone. Razer is taking smartphone cooling to the
next level. If you like seeing stuff like this, make sure
you're subscribed. You can see that the half currently opened
up is already evaporated.

But this new flap has all the liquid droplets
still inside. Technology is impressive, and Razer definitely
gets a thumbs up for this one. I don't think I'll be able to reuse the chamber
now that it's been opened up. I don't want any sharp metal edges up against
the underside of my battery. The phone will still work without the copper,
it just won't be as efficient under heavy workloads. The chamber is seriously pretty cool. The 120 Hertz screen can be replaced if needed,
but it's glued into the metal body of the phone, so we'll leave it alone for now since
screens don't normally survive the removal process. I'll get the loud speaker tucked back into
place, and the charging port, along with all of it's screws and associated wire cables.

Before I can set the motherboard back down
though, it needs the screen ribbon cable plugged into the underside, screwed in and secured
with it's silver bracket. Then it's ready to be set down into the phone. I haven't turned on this phone in a while. Pretty sure it's dead from the LED flashing
on the back for a few days.

We'll find out in a second. I'll plug in the large charging port ribbon
cable, clips in like a little Lego, as well as the power button ribbon on the left side. Then the whole cool looking battery wireless
charging contraption can slide back onto the phone. Now that I've seen the insides, I'm way more
impressed with the Razer Phone 2. I'll plug in the LED RGBs, add the metal bracket
over the battery connector, and set down the protective plastics over the motherboard. We should be good to go. I'll plug it in while I get the new back glass
into place. Razer has outdone themselves this year with
the cooling system. And there's definitely a new standard in town
for gaming phones. It's a super solid build. Hit that subscribe button if you haven't already. Come hang out with me on Twitter and Instagram,
and let me know if you have any questions down in the comments.

Thanks a ton for watching, and I'll see you
around..