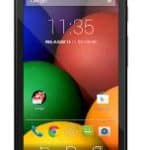 Motorola’s strategy has been a peculiar one lately to say the least. In the high-end segment, its Moto X Android smartphone proved to the masses that great phones don’t need beefy specs to stand a chance in being successful. Meanwhile, on the other end of the spectrum, its Moto G ushered in a new era for the proud company with its hard-to-beat price. In following up to that success, the Moto E stands to continue

We are proud to introduce the Motorola Moto E Smartphone on contract and prepaid! This

phone is perfect for beginners as it is very easy and clear to use. Yet it is also perfect for

Smartphone lovers. Some of the amazing features on this phone are the 4 Quad-core processor,

the ability to expand memory for all those photos!

Motorola has chosen to put a feature called Moto Display on the Moto E, a feature that was not

added to the Moto X. This feature works by when you get a notification the screen will

periodically pulse with the time on the clock.

Moto E benefits from having four Cortex-A53 cores a 1.2 GHz, combined with Aderno 306

The show stopper with Moto E is the addition of LTE connectivity. LTE is actually a way more

efficient standard then 3G today! With LTE the battery will last and last. They say the Moto E

will give you over 24hrs of heavy use!!

This is an amazing Smartphone for its price! 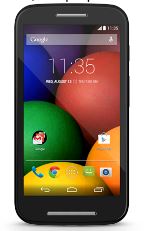 Stop in at Cambridge Electronics, your local TELUS dealer to pick up your new Moto E today.