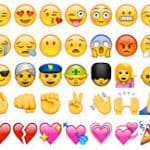 Are you Tired of your Existing Emojis on your Android Device?

Well changes are coming where Google will be releasing new Emojis that look a lot more like people. Check out the recent article by Android Central below which details exactly what Google is doing.

Android is finally making its emoji look like people

We still don’t know Android N‘s eventual food-related name, but we are slowly learning more about its extensive feature set. In the second Developer Preview issued to a variety of Nexus devices today, Google announced that with N it will support Emoji Unicode 9 standard, which includes a number of new pictorials. Google also plans support for skin tone variations, a feature that iOS users have been enjoying for some time.

But perhaps the most interesting change is that Google is moving away from its often-reviled cartoon emoji in favor of a “more human-looking design,” according to a post on the company’s developer blog.

The Unicode Consortium, the organization that decides on which emoji will be added to each release, plans to make Unicode 9.0 available sometime in June 2016, well before Android N becomes publicly available. New glyphs include “Face Palm,” “Bacon,” and “Mother Christmas,” though not every character will likely be included in the Android N update.

Looks pretty good definitely a step up with what we have been using to date. 9To5 Google had another great post letting us know what Samsung has coming our way with regards to emoji changes below.

The just announced Galaxy S7 and S7 Edge will launch with a host of new emoji. Emojipedia has full details on the 159 new emoji and countless changes to the current ones. Users of older Samsung phones will get the refreshed emoji as part of the Android 6.0.1 Marshmallow update that is rolling out now.

Samsung’s take on emoji is much more rounded and in-line with Apple’s, Whatsapp’s, and countless industry others. In comparison, Google uses a much more bulbous-looking character on Android and in Hangouts on the web. The last time Samsung updated their emoji was with the launch of 2013’s Galaxy S5 with 4.4.2 KitKat.

Please go back to their post for the full post. These changes are coming we just have to be a little patient. For more information stop by the Telus Authorized Dealer Store for more detailed information.