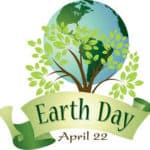 Did you know that when you activate or renew your phone at Telus and take advantage of our Trade and Save Program to recycle your old device Telus pays to have a tree planted on your behalf for doing your part in helping to recycle? Earth day is very important and this is Telus’s way to show we are doing our part.

Here is a great a great article about Earth D posted at http://www.telegraph.co.uk/ by Cara McGoogan check it out here:

Earth Day 2016: five inspiring facts and how to do your bit

On Friday, leaders from 160 countries will officially sign the Paris Climate Agreement on Earth Day 2016.

The deal was thrashed out in Paris last December in order to stem global warming.

The signing makes this year’s Earth Day one of the most important in years, and the organisers will be attempting to build on the momentum created by last year’s Paris Climate Summit.

To mark the day, Google has designed a Doodle, one of many that it creates year after year.

“Earth Day is the largest, most recognisable face of the environmental movement,” said Kathleen Rogers, president of the Earth Day Network.

During the Paris talks world leaders agreed to keep global warming below 1.5 degrees Celsius, with developed countries providing $100 billion (£70 bn) of public and private finance to help developing countries by 2020.

The organisers behind Earth Day, which occurs annually on April 22, are hoping to use the 2016 celebration to plant 7.8 billion trees, divest from fossil fuels and make cities 100 per cent renewable.

“Let’s take the momentum from the Paris Climate Summit and build on it,” said the Earth Day organisers. “Let’s start now. And let’s not stop.”

More great reading on Earth Day by checking out www.earthday.org here is some of what you will see there below:

What are we waiting for? The time is now.

This Earth Day, let’s get really big stuff done for our planet.

We are now entering the 46th year of a movement that continues to inspire, challenge ideas, ignite passion, and motivate people to action.

In 1970, the year of our first Earth Day, the movement gave voice to an emerging consciousness, channeling human energy toward environmental issues. Forty-six years later, we continue to lead with groundbreaking ideas and by the power of our example.

And so it begins. Today. Right here and right now. Earth Day is more than just a single day — April 22, 2016. It’s bigger than attending a rally and taking a stand.

This Earth Day and beyond, let’s make big stuff happen. Let’s plant 7.8 billion trees for the Earth. Let’s divest from fossil fuels and make cities 100% renewable. Let’s take the momentum from the Paris Climate Summit and build on it.