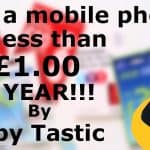 hi there, Alby Tastic here. In this
video I'm going to show you how to get a really cheap mobile phone and use it for
under one pound a year! Sound impossible? it's not – I've done it and I'll prove it.
Now here's a brand new phone I bought a little while ago on eBay for £6.99
including free delivery. It came in a sealed box with a brand new battery, a
SIM card, a charger and instructions. And there's plenty more like this on eBay
and Amazon, both locked and unlocked. The one I got was locked to the Vodafone
Network but that doesn't matter. And Sim cards are just as cheap. I got these for between 6p and 9p on Amazon and that also included free delivery. Now the only ones that didn't work were the network 3 cards.

I don't know why but the phones
just said "insert SIM" whether they had SIMs in them or not but I didn't worry
about that since the other SIMs worked well. Now obviously you need the phone
numbers of the SIMs and O2 and Vodafone have the numbers printed on the
cards they come in but for Lycamobile you have to insert the SIM card into a
phone switch on and you'll get a text message telling you the number. Now once all that's done just check the number is working by phoning it from another phone. As long as the phone rings everything is
OK, if not just wait until it links to the network and it should be good to go.
All the phones I tried work perfectly. Now we DON'T I repeat DON'T top these
phones up – that would rather defeat the purpose of using them for virtually
nothing. instead we use them to receive only. I use mine for second verification
on various websites, for banking and e-mails etc but you can also receive incoming calls and chat to whoever phoned – you just can't phone out.

Which makes it very handy in this time of crisis when you may have elderly
relatives on their own and a phone such as this would allow you to check up on
them with no cost to them and if you put the number on a friends and family account if you have one no cost to you either and if you have older phones such as
these sitting around it's a great way to repurpose them if they should need a new
battery you can buy them on eBay for about £3-4. Now I've used this technique for about four years. I bought this phone on Amazon for about £18 and the battery is just beginning to show signs that it might be getting a
bit old. It needs recharging about every three days instead of every seven to ten
days but I've certainly had my money's worth from it and a new battery will make
it fighting fit again.

Well I hope you enjoyed this video and hopefully profit from it and if you give it a like and subscribe that will be excellent and I'd love to know what you think of this video and my
others so give me a comment as well and I'll see you again soon.