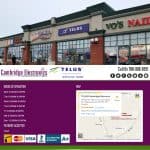 Cambridge Electronics Incorporated in Fort Saskatchewan, Alberta, Canada, has announced that they will be joining TELUS in the fall in giving to help vulnerable youth reach their full potential. Dan Lheureux’s TELUS Dealership in the Cornerstone Mall is also helping youth following the TELUS lead.
While away on a course Dan states that he, “Came across ‘Operation Underground Railroad.’ This is an organization that helps to pave the way for the permanent eradication of child sex trafficking and we could not be more proud to be a part of this initiative.”
Dan says that they are on a program that supports this mission on a monthly basis. He asks that others take the time to learn more about this sad and very serious issue so that they will hopefully join the cause, as well.
“We need all of the help that we can get to end this tragedy,” Dan says. “Please join our Cambridge Electronics Fall Giving mission and help us to end this way of life that so many innocent children are experiencing. It’s a life that no one should have to endure and our ultimate goal is to save these children and future children from ever having to experience this again.”
Dan says that those who are interested in helping can visit the company’s official website to learn more. Meanwhile, TELUS had launched the TELUS Friendly Future Foundation which gives grants to grassroots charities so that they can help to give children a brighter future. Recently, TELUS, which is based in Vancouver, announced that they are giving an unprecedented $120 million to launch the program. The TELUS Friendly Future Foundation is an independent charitable organization that was structured to address the issues that are faced by Canada’s disadvantaged youth today. The donation marked the largest charitable contribution made by a publicly traded Canadian company in history. It was also the largest donation ever made at one time in all of North America.
When announcing that Cambridge Electronics joins TELUS in fall giving, Dan stated that throughout Canada, there are more than 1.5 million children who go hungry every day. These children do not have access to the proper nutrition foods that they need daily. More than 350,000 children and young adults are in government care where they lack the support of a loving and caring family. These children very often experience untold
Cambridge Electronics Joins Telus In Fall Giving
Distributed on 11/05/2018
About Telus/Cambridge Electronics Incorporated:
Weâ€™re a team of about a dozen Telus Specialists, professional problem solvers, tinkerers, and all around geeks, working around the clock to make Cambridge Electronics Incorporated the best Telus Service Provider in the universe.
Contact Telus/Cambridge Electronics Incorporated:
Dan LHeureux 105-8701 94 st Fort Saskatchewan, Alberta T8L 4P7 7809989551 [email protected] https://mobilityhelp.com/
trauma and their feelings of isolation follow them into adulthood. Statistics show that more than 30,000 Canadian citizens, many of whom are young children, are homeless. On any given night, one can travel through any major city street and see these people who have lack of access to healthcare, food and a safe place to sleep at night.
Statistics also show that more than 30 percent of all low income families in Canada lack affordable access to the internet, which has become pivotal for children today. Children who lack reliable access to the internet may risk falling behind in their studies, which again could lead to issues that follow them into adulthood.
Dan says that his company just wants this nightmare to end for these children. He says that they could not find a more worthy cause to which they can donate and states that these children are the future of Canada and they should be cared for as such.
“These are children who are going to grow into adults who may one day be capable of running Canada, or even the world,” Dan says. “We believe that they deserve a chance to show the world what they have. We believe fully that these children deserve our compassion, our caring, to help them to reach their fullest potential.”
Dan says that the company urges anyone who can to help them with this cause. He states that those who would like more information can find TELUS on their official website or learn more on any of the company’s social media pages. He states that those who are looking for a good cause to donate to should learn more about this important movement and how it can help not only the underprivileged children of the country, but the country itself.
Those who are interested can learn more about TELUS and their fall giving campaign by visiting them online. Alternatively, those who would like more information on Cambridge Electronics Incorporated in Fort Saskatchewan, their company, their products or their initiative to help Canada’s children can visit them online or stop by and see them in person at the Cornerstone Mall to learn all about the organization and how they are helping children.
###

Telus Videos in the News! 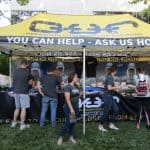 PAVES THE WAY FOR PERMANENT ERADICATION OF CHILD SEX TRAFFICKING

We are on a program that supports this Mission on a monthly basis and asks people to take a look at this very sad and serious issue and hopefully join the cause!

Vancouver – TELUS announced it is giving an unprecedented $120 million, launching the TELUS Friendly Future Foundation, an independent charitable organization mandated to address the social and economic challenges facing Canada’s disadvantaged youth. This inaugural endowment is the largest donation made by a publicly traded Canadian company in history and one of the largest ever in North America.

Across Canada, 1.5 million children go hungry without access to nutritious food every single day; 350,000 young people are in government care and, lacking the support of a family, often experience trauma and an isolating transition into adulthood; 30,000 Canadians, many of them young people, are homeless on any given night and lack vital access to healthcare; and 40 per cent of low-income families lack affordable access to the Internet, putting kids at risk of falling behind in school.

“At TELUS, we believe that the challenges faced by vulnerable Canadian youth are unacceptable, which is why we are increasing our support of this important group,” said Darren Entwistle, President and CEO of TELUS. “The TELUS Friendly Future Foundation enables even the smallest grassroots charities that are on the front lines in our communities – yet are often overlooked by large corporate donors – to receive funding grants that will be used to help young Canadians build digital literacy skills, provide basic healthcare and mental health support to the homeless, and open up essential educational opportunities.”

Mr. Entwistle added, “In the last two decades, TELUS, our team members and retirees have contributed more than $1 billion through $530 million in financial support and 1.21 million days of volunteerism, giving with our hearts and our hands to Canadians, yet still, there is so much more to be done. Working with the TELUS Community Boards, the Foundation will help to remove barriers and connect our most vulnerable citizens to the resources they need. The potential of these young people is boundless, and it is our responsibility to support and nurture them.”

TELUS has a legacy of helping disadvantaged Canadians, earning a global reputation as a values-driven company and the honour of being the first Canadian organization named the most philanthropic company in the world by the Association of Fundraising Professionals.

The support provided by the TELUS Friendly Future Foundation complements TELUS’ existing social-purpose initiatives, including:
● Internet for Good, a ground-breaking program that offers nearly 30,000 low-income families in B.C. and Alberta access to low-cost, high-speed Internet and a computer. TELUS is expanding this program to even more families through the Government of Canada’s “Connecting Families” initiative this November;

● Mobility for Good, which offers a free cell phone and data plan to youth aging out of the foster care system in B.C., Ontario, and Quebec, ensuring this vulnerable population can stay connected to their support networks, social services, education and employment opportunities. TELUS will expand this program to Alberta this November, and Manitoba in February 2019;

● Health for Good, an innovative national program that provides healthcare to vulnerable and underserved Canadians through the deployment of specially equipped mobile health clinics into communities where frontline care is urgently needed.
For more information about the foundation, to make a donation, or to apply for a grant, please visit friendlyfuture.com.

About TELUS’ social purpose:
In support of our philosophy to give where we live, TELUS, our team members and retirees have contributed over $530 million to charitable and not-for-profit organizations and volunteered more than 8.7 million hours of service to local communities since 2000. Created in 2005 by President and CEO Darren Entwistle, TELUS’ 13 Canadian Community Boards and five international boards have led the Company’s support of grassroots charities and have contributed $72 million in support of 7,000 local charitable projects, enriching the lives of more than 2 million children and youth, annually. TELUS was honoured to be named the most outstanding philanthropic corporation globally for 2010 by the Association of Fundraising Professionals, becoming the first Canadian company to receive this prestigious international recognition. For more information about TELUS, please visit telus.com.